This week’s job of the week is an Administrative Business Analyst (#496468) for the Eli Broad College of Business.

This position is seeking an individual who will provide financial and operational oversight and high-quality service to support Executive and MBA graduate students, faculty, alumni and staff. Responsibilities for this role include maintaining accurate financial accounts, interpreting/communicating policies and procedures, and demonstrating sound judgment to meet unit objectives.

The ideal candidate would possess knowledge equivalent to that which normally would be acquired by completing a four-year college degree in a business-related field or in a field which corresponds to the particular department of employment; one to three years of related work experience in office procedures, or in performing responsibilities related to the operational activities of the employing unit; experience with word processing, database, spreadsheet, presentation software and/or desktop publishing, web page software; or an equivalent combination of education and experience.

In case you missed it, here are the March 2018 Source newsletters.

You can find older editions of the newsletter on the HR website.

Here are the headlines at a glance for this month’s Source: 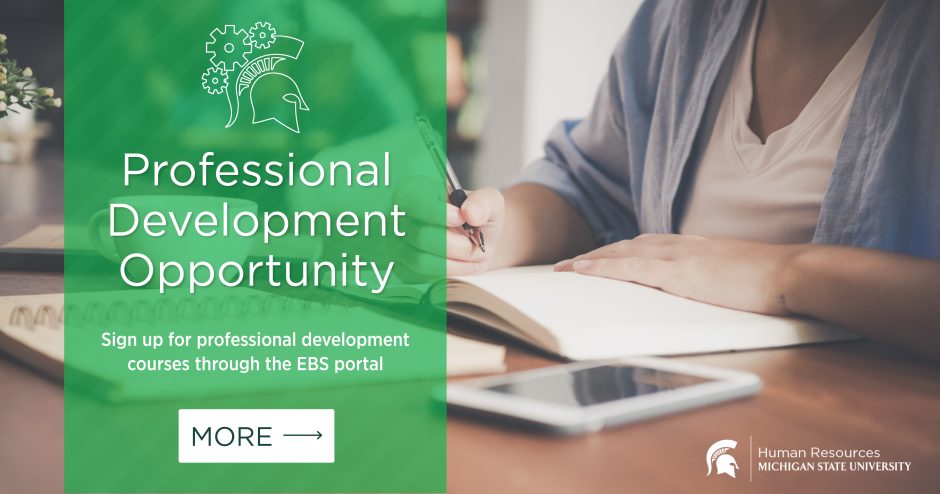 Are you a leader of your unit or department? As a leader, you are faced with three fundamental responsibilities: to craft a vision, build alignment, and champion execution of that vision. The course Everything DiSC: Work of Leaders focuses on understanding how your tendencies influence your effectiveness in specific leadership situations around the vision of your unit or department.

For this course, you will take an online assessment that will provide you with a personalized report. This report focuses on developing preferred behaviors to improve leadership skills around building and sustaining a vision. Using the report you will:

Good leadership skills can be difficult to learn because they are behavioral in nature. The course instructor will help you understand your report and walk you through your leadership strengths and challenges. Please note, the Everything DiSC: Work of Leaders approach is for the one-to-many relationship of the leader, as opposed to the one-to-one relationship of the manager.

Everything DiSC: Work of Leaders is Tuesday, April 24 from 8:30 a.m. to Noon. Sign up for the course by logging into the EBS Portal and selecting the Courses for Employees at MSU tile under My Career and Training.

This week’s job of the week is a Power Plant Technician III (#494806) for Infrastructure Planning and Facilities (IPF).

This position is seeking an individual to serve as a senior power plant technician. This individual will monitor equipment, analog and digital electronic controls, electric devices, pneumatic devices, and analytical equipment. The technician will perform back up duties to test and chemically treat boiler feed water and cooling water systems.

The ideal candidate would possess knowledge equivalent to that which normally would be acquired by completing an associate’s degree in Industrial Chemistry, Digital Electronics, or a related field; five years of satisfactory technical experience in a power plant or other industrial process environment, including two years as a Power Plant Technician II; or an equivalent combination of education and experience.

Responsibilities for this role include thorough knowledge of materials, methods, tools, equipment, occupational hazards, and safety precautions of the trade. The individual must have a  demonstrated ability to read blueprints, interpret specifications of instructional manuals, and an aptitude of tuning and troubleshooting control loops.

March is National Colorectal Cancer Awareness Month, as well as National Nutrition Month. Nutrition is an important part of taking care of your body to help prevent health problems. Proper nutrition is a combination of daily exercise and having the right diet.

Both factors are important for colorectal cancer awareness and overall colon health. One of the most overlooked areas of general health and wellness is the maintenance of colon function and colorectal cancer screening. Colorectal cancer is the third most common cancer in both men and women. Poor colon health can lead to many other problems such as irritable bowel syndrome, Crohn’s disease, diverticulitis, hemorrhoids, and chronic fatigue.

The colon stores and transports human waste material, creating an opportunity for prolonged waste storage to burden your entire body

Here, are some of the most common causes of colon problems:

Having your screenings done is essential for colon health, especially for people over the age of 50. In addition to cancer screening, there are many other steps you can take to improve your colon health such as stress reduction, increasing fiber in your diet, and making sure you stay hydrated. If you are unsure about your colon function, your Best Doctors benefit can help you eliminate uncertainty and add an expert perspective to the information you are gathering. For more information, call 866-904-0910 or visit bestdoctors.com.

This week’s job of the week is a Botanical Technologist I (#494136) for Infrastructure Planning and Facilities.

This positon is seeking an individual to participate in the collection, development and maintenance of diverse plant materials. The Botanical Technologist will assist and participate in the maintenance of the botanical garden and greenhouse, and the production greenhouse operations for the Beal Botanical Garden. This position will be responsible for service, maintenance, and activities of common and rare plants for the garden.

The ideal candidate would possess knowledge equivalent to that which normally would be acquired by completing a four-year college degree in botany or horticulture; six months to one year of related and progressively more responsible or expansive work experience in botanical gardening, pest control and plant identification; or an equivalent combination of education and experience; and an Ornamental and Turf Pesticide Applicators Certificate.

Responsibilities for this role include a creative and innovative lifelong learner with the ability to communicate effectively with a diverse population, able to problem solve within a collaborative team environment, ability to understand different perspectives while utilizing expert knowledge of the technical operations of the job.

This is a guest post written by Lydia Weiss at the WorkLife Office.

Slowly but surely, the wage gap is decreasing. Currently, women earn on average 80 cents for every dollar paid to men. However, the reality is that even if the wage gap is decreasing over time, this inching towards parity has not really budged in over a decade, according to the American Association of University Women (AAUW). Although the Equal Pay Act was enacted by Congress in 1963, the wage gap persists. The gap is also particularly glaring for women of color.

One contributing factor to the pay gap is that women are often offered lower starting salaries than their peers who are men – and then women often do not negotiate to increase those offers. As many folks in the business world know, your starting salary is the foundation for future raises, therefore if women’s starting salaries are lower than men’s to begin with, their opportunity for raises is stunted, especially when those raises are based off a percentage of your current salary. For instance, if a woman negotiates a 1% raise and her salary is $40,000, and her colleague who is a man also negotiates a 1% raise, but is making $50,000 – the wage gap persists based on their existing salaries.

At MSU, in addition to the salary negotiation workshops on April 11, other organizations exist to support women-identified folks in building professional skills in negotiation, mentoring, networking and confidence building. The Women’s Networking Association, Academic Women’s Forum, and Women’s Advisory Committee for Support Staff are just a few ways to get involved.

This week’s job of the week is a Catering and Sales Coordinator (#493594) with Residential and Hospitality Services (RHS).

This position is responsible for selling, planning, coordinating and detailing all events for Kellogg Center Catering at the Stadium Tower and other MSU campus locations. This includes assisting in the development and implementation of sales, marketing and promotional materials for Kellogg Catering. Additionally, the Catering and Sales Coordinator will maintain all accounts and generate new business for Kellogg Catering markets, negotiate rates for events, and meet assigned monthly sales quotas.

The ideal candidate would possess a four-year college degree in Business Administration; Hotel, Restaurant and Institutional Management; Communications; or a related field; one to three years of related and progressively more responsible or expansive work experience in Hotel Catering Sales or Hotel Sales and Hotel Operations; or an equivalent combination of education and experience.

Spring is just around the corner and with that comes Daylight Saving Time. We’re losing an hour of sleep to get ready for the warm weather. Here are seven tips to help you adjust:

With these seven tips, you can increase a better sleep schedule for this year’s Daylight Saving Time. Try at least one of these tips and see how you feel the next day. Remember to spring forward this Sunday by setting your clock forward one hour.

According to one happy EZ Receipts App user: “I absolutely love the WageWorks EZ Receipts mobile app. It makes using my WageWorks benefits so simple. I just snap a photo of my receipt with my smartphone and submit my claim for reimbursement. I signed up for text alerts recently, and now I check my account and card balances when I’m on the go. It couldn’t be easier!”

Watch the video below to learn how to use the EZ Receipts App.

The WageWorks EZ Receipts App is available for download from the App Store or Google Play.